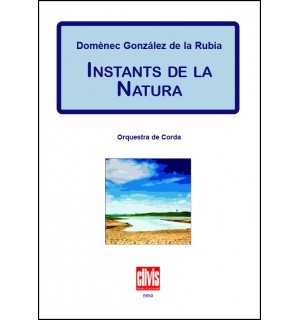 Instants of Nature for string orchestra seeks to create a lyrical and, above all else, expressive vision of nature. Certain landscapes can be linked to subjective moods and feelings.

Instants de la natura (Instants of Nature) for string orchestra seeks to create a lyrical and, above all else, expressive vision of nature. Wholly convinced in the belief that music exists to express emotion, I wrote this score in which the act of visualising certain landscapes can be linked to subjective moods and feelings.The piece was entered for the 2008 Concerts Verds (Green Concerts) competition organised by Berga Municipal Council, where it won first prize. In terms of its difficulty, this piece is suitable for mid-level orchestras, and is structured into three movements: El murmuri del vent (The Whisper of the Wind), El sospir de la nit (The Sigh of the Night) and La ferida de l’aigua (The Wound of the Water).
El murmuri del vent: is a movement in which orchestral work is reduced to a minimum: although each instrument has its moment to shine, taking the lead, what is required above all else is the complete integration of sounds in order to create dreamlike textures, with displaced entrances and a strong counterpoint. The aim of this movement is to reflect a landscape being caressed by the night breeze. For a moment, we feel anxious, but eventually we achieve a contemplative state in which we can peacefully observe the beauty of our surroundings. The wind no longer poses a violent threat, but accompanies us in our idyllic vision until gently welcoming us.
El sospir de la nit: is a highly expressive movement which moves almost always within the realm of the whisper. The violas begin an arpeggiated figure (representing the murmur of the wind), while the violins play the melodic lead, playing three-part and, at one point, four-part divisi. The central part, a rhythmic and vertical score, contrasts with the play of voices of the rest of the movement. In a mysterious forest, inhabited by fantastical beings, the wind caresses the leaves of the trees. We are lost in this strange forest. The sensation of fear in the face of the unknown at times transforms into a kind of tranquillity, but the oneiric vision of a landscape submerged in the depths of the night wins out. We keep on going in the face of the unknown but, in the end, after all the worry, we managed to escape the labyrinth in which we had been plunged.
La ferida de l’aigua: is a movement of pure orchestral energy, in which the beat is imposed and various technical features, such as four-string pizzicato, tremolos and tones on the bridge are called on in the service of a music that evokes the fast-flowing descent of the river through the gorges. The current flows strongly even through the narrowest stretches, eroding every bit of land which blocks its path. It is the same fight with which one rebels against and overcomes adversities. It is an agitated and indomitable battle, only at the end of which can one find peace. It is the river which, like life, faces adversity at every turn and keeps on moving forwards.