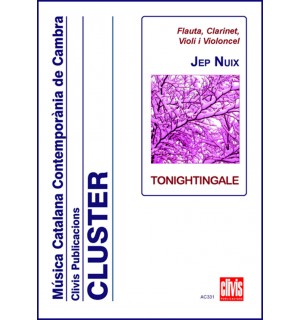 Jep Nuix collaborated with Vol ad Libitum for the first time in a concert we performed in the courtyard of the former Santa Creu Hospital, as part of the Grec ’85 Festival events. From then on, and during several very prolific years, Jep formed part of the instrumental ensemble as a flautist and composer, putting forward interesting performance and musical criteria that generally contributed a lot to the ensemble becoming professional. The works always involved electroacoustic resources, a criterion that Jep defended for reasons intrinsic to his understanding of the music. This was doubtlessly very much influenced by the maestro Gabriel Brncic and his work in the Phonos Laboratory.

In that period with Jep, we followed a line of work in which performers and composers worked in (amongst others) a joint task: in rehearsals the performer would bring their know-how and the composer expressed their criteria, conveying the same approach of the work. Later meditations on the works could also occasionally translate to changes in the score.

After a certain number of concert programmes, and following a process that we consider natural, the ensemble decided to increase the repertoire to incorporate other composers from Spain and around the world. In the same direction that the group had taken, we (composer and violinist Gabriel Brncic and composer and pianist David Padrós) joined Vol ad Libitum, in successive stages. In parallel to this process, Jep immersed himself fully in his work, a situation that would mark a new boost for his own work and relegating his performing side to second place (he never stopped performing, however, as can be seen in his debut performances of later works).

After leaving Vol ad libitum, collaborations continued to happen, such as Tonightingale, included in the “Nit” programme that the ensemble first performed in the Beckett Room in Barcelona in 1994.

In Tonightingale, Jep’s trademark features can be heard, thanks to the austerity of the materials used.