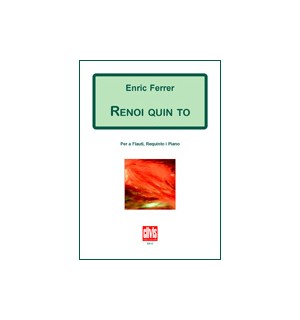 Wow, what a tone! is a little musical joke or Humoreske on the melody of the beginning of the Sardana.

Renoi quin to (Wow, what a tone!) is a composition that my good friend and clarinetist Frederic Miralda asked me for, and I’ve dedicated this work to him. In actual fact, he asked me for a composition for the piccolo and requint (a flute-like instrument). With such a high pitch range in both instruments, it struck me to add some piano and make a kind of musical joke. A humoreske. The requint is somewhat reminiscent of the tiple, and together with the piccolo they are two typical instruments of the sardana (traditional Catalan folk songs). They perform the phrase that announces the start of the sardana, but even though it contains it, the sardana never begins.
The work was first officially performed in 2008, the same year it was composed. The title in fact is already a play on words that plays with the local term for the instrument: requint.
It is a simple piece that clearly provides a very distinct training and that both clarinetists and flute players (or at least the ones I have spoken to) seemed to have enjoyed performing a work with these two instruments which are never (or almost never) brought together for chamber music.