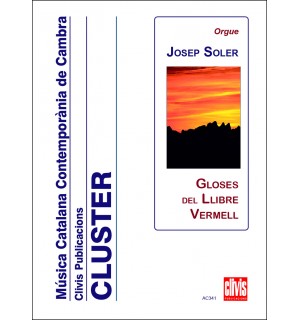 The work is based on a summary of four songs from the Llibre Vermell (Red Book) by Montserrat.

Josep Soler is the contemporary Catalan composer who has written the most for the organ. In the words of the composer, “the organ is a magnificent instrument but has many traps; what attracts me above all is the fact that the organist and the audience hear such different things given the acoustic conditions of the instrument, the room and the positioning of the pipes, which are often far away from the keyboard”.

This album for organ is a compilation of four pieces, the first of which is dedicated to Montserrat Torrent, the great organist from Barcelona who was the first performer to make Soler’s organ works known.

The work is based on the gloss of four songs from the Llibre Vermell (Red Book) by Montserrat that, according to the composer “is one of the few musical Catalan monuments that can be defended from any point of view”. The four pieces that comprise this album for organ are joined merely by the reference to the quoted book by Montserrat, as they present very diverse language given the time gap between each one.

As Soler says, “it is very important to upkeep appreciation and take responsibility for works composed years ago”.

Inperayritz de la ciutat ioyosa, was composed in 1965 and performed for the first time in Cambridge a year later. The highlight of this piece is the cantus firmus in the deep range. Mariam Matrem, from 2006, was composed without specifying the time and is in pianissimo throughout. It was first performed during the events held in aid of the 20th anniversary of the Collbató organ (Collbató is a town that is famous for manufacturing organs). He also wrote Stella splendens in the same year, based on one of the most popular fragments of the Llibre Vermell (Red Book), written in a slow time in piano represented by ppp throughout. Several changes of range in the highpitched voice are particularly noteworthy. It was first performed in the Franciscan church in Barcelona. The last of the works, entitled Polorum regina is the most recent, written in March 2009. The highlight is the counterpoint game with four and five voices with which he develops the Montserrat theme.

Some of these pieces have been recently recorded on CD by the prestigious organist Agustí Bruach.