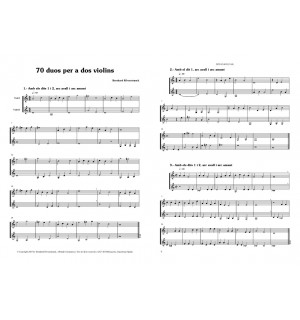 These duets were written with the aim of familiarizing violinists with playing techniques, introducing them to playing chamber music. They can also be played by other instruments such as cello, viola or piano.

These duets were written with the aim of familiarizing violinists with playing techniques, introducing them to playing chamber music, opening up the different melodic, rhythmic, sound, tonal and formal possibilities, and providing composition students with examples of composing for two voices, with a particular emphasis on the typical characteristics of violin techniques.
For concert performances you have the option of choosing from two to five different duets. This choice is up to the preferences and techniques of the players.
They can also be played by other instruments. Almost all the duets can be played by both the violin and the viola while many can be played by the violin and cello (though the latter at one octave lower). A number of the duets can also be played on the piano with four hands or on two pianos. They offer great freedom of interpretation to strengthen the melodic lines, playing with octaves or adding a third, fourth, fifth or even sixth stanza. This offers a great opportunity for improvisation when playing the piano.