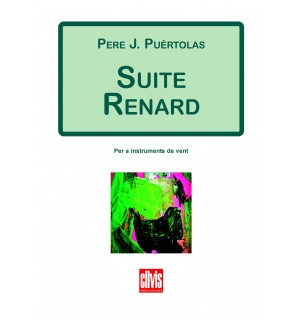 The Suite Renard is playful piece. Twenty years after its debut, the composer has recently composed an arrangement for wind ensemble with double bass. The work consists of five complementary movements, with no other pretension beyond that of passing a bit of time with live and cheerful music.

The Suite Renard is playful piece, originally written for a string orchestra, and was partially debuted in 1989 by the Orquestra de Cambra Catalana, led by Joan Pàmies, at the Nick Havanna Club in Barcelona as part of the ‘Music of the 20th Century’ music cycle. Clivis Publicacions released the printed edition in the year 2000 (ref. E381). Twenty years after its debut, the composer has recently composed an arrangement for wind ensemble with double bass at the request of Abili Fort, the Technical Director of Banda Municipal de Barcelona. This latest version now being published by Clivis Publicacions was debuted on 20 May 2010 by this band at the Eduard Toldrà Auditorium at the Barcelona Music Conservatory, led by Joan Enric Lluna.

The work consists of five complementary movements and, in the words of the author: «it is just a bit of fun, with no other pretension beyond that of passing a bit of time with live and cheerful music, without any more profound intentions». The common thread running through the collection also responds to this playful spirit: the titles of the different movements include words beginning with the syllable “re» in reference to the musical note which defines the tone of the piece. These movements allow a story to emerge about the protagonist, the kiss, the joy of love, dreams about the future and an ending which returns everyone to their respective paths. However, the author insists, in what is a pleasing play on words in his native Catalan between the words “re”, the musical note, and “res”, meaning nothing: “we should say “re” about all of this”, adding that “it is about enjoying yourself while playing it and making those who are listening to you enjoy themselves too”. Despite the intentionality of the work, the author does not shy away from the exigency in chamber music and in the search for original textures and timbres from the possibilities offered by the combination of wind instruments with the double bass.