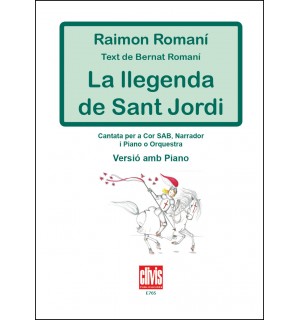 The cantata of The Legend of St George (La llegenda de Sant Jordi) puts music to the most well-known of Catalan legends. It tells of the liberation by St George of the town of Montblanc when it was ruled by a terrible dragon.

A princess also plays a prominent role in the story, as well as the King of Montblanc and the whole population, who live through an experience that ranges from desperation through to the final victory. The music is structured into eleven numbers, some of which are linked and others not.
St George, the King, the princess and the dragon all have their own musical leitmotivs. That of St George is the one you hear as soon as the overture starts, and reappears at the time of the battle against the dragon, but becomes most prominent in the fi nal chorus. It is an impetuous and vigorous melody but can also be very lyrical, as in beat 625.
The leitmotiv of the princess is a simple descending melody which also appears in the overture and recurs throughout the piece with different nuances depending on the point the story has reached. The Children’s Song is based on this motif. It also references the roses that flourish from the dragon’s blood; the princess and the rose are united within the same concept. The two motifs of St George and the princess are superimposed triumphantly in the final instrumental beats of the work, celebrating the union between the humanity of the village and the superhuman feats of St George. The King sings a pavana, a typical royal dance, though due to his pompous and distant nature he never loses its severity even when proclaiming dramatic events. The dragon can be identified by a grotesque motif based on an augmented triad chord. It appears for the first time in beat 113 and re-emerges every time the dragon is spoken of.