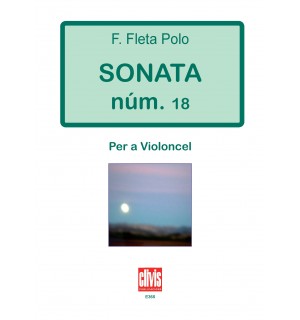 Following the principles that guide all Fleta’s works, the Sonata for Cello was written essentially to please the performer, with the conviction that if the player enjoyed performing it, then the audience would enjoy listening to it.

One of Fleta Polo’s great skills as a composer is instrumentation and, in works such as this one, re-instrumentation. He is a true expert in instruments, their possibilities and their combinations and is passionate about investigating their features and limitations. It is therefore hardly surprising that his oeuvre includes works originally written for a specific instrument (or group of instruments) and subsequently re-orchestrated for different formations.
This Sonata for Cello is, indeed, a version of the Sonata for Viola, one of the composer’s most frequently-played pieces and also one of his most highly-regarded scores. It dates back to the 1950s and according to the composer himself, “it’s from a time when I was writing a lot of Spanish music. I was learning the scores of Falla, Granados and Albéniz and I composed a lot of works in that same Spanish spirit. Years later, I went back to them and threw the lot out. I just “saved” three pieces: the Six Spanish Songs, the Route of Don Quixote and the Sonata for Viola which, though I now see it as being representative of that era, has become very popular for its artlessness and clean academic structure.”
The work is structured into four movements and allows the player to showcase all the qualities of a good instrumentalist: virtuosity, expressiveness, the mastery of different registers, etc. The Sonata for Cello is dedicated to Lito Iglesias, who was also responsible for editing the printed version. According to the instrumentalist himself, “Francisco Fleta’s Sonata is a really important work, a great piece. I’ve had the pleasure of playing it on many occasions since I played it for the fi rst time the 2nd February, 1995 at the Barcelona Conservatory, and it’s always given me a great deal of pleasure to play.”