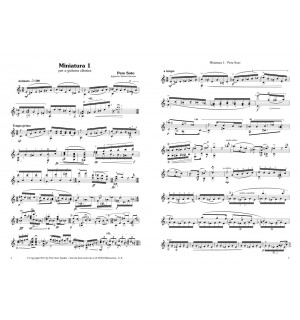 The Seven Miniatures for Classic Guitar feature baroque airs, classical citations and touches of contemporary jazz, a genre in which Pere Soto is an expert in his facet as a performer.

Pere Soto’s profound knowledge of the guitar allows us to present these pieces with the confidence of offering a well-constructed work for one of the most popular instruments in the world.
Pere Soto composed them in 1998 over the course of several weekends he spent in the town of Berga, coincidentally in the same house that the great guitarist Paco de Lucia had stayed in many years before. According to the composer, his challenge was to compose one piece every week for players who wanted to stretch themselves to the utmost, and he felt that seven was a number with a certain magical aspect.
Edwin Guevara, the renowned Colombian guitarist who played the Seven Miniatures for Classic Guitar for the first time in Barcelona in 2007, says: “With the experience of having studied and played them on various occasions, I can confirm that they call for a player who can master every technical challenge as the work is highly complex. These pieces are perfectly written for the instrument and you also need a good intellectual understanding to get an insight into the composer’s concept. For me it has been a fantastic experience to play these pieces and they have made a huge contribution to my performing career. I would recommend the Seven Miniatures to every guitarist who wants to tackle an extremely demanding work”.
The Seven Miniatures for Classic Guitar feature baroque airs, classical citations and touches of contemporary jazz, a genre in which the composer is an expert in his facet as a performer.